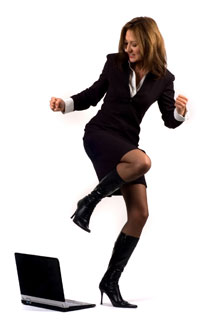 a previous trade. Many people call this revenge trading and it can come in various forms. However, the most common is to double up on future trades to try and make back previous losses quicker.

Getting one’s revenge is admitting that you think the market did something to you on purpose when in fact, the reason you took the loss could have been entirely your own fault. Taking regular small losses is just par for the course when regularly trading, but as long as you have a strict trading plan with specific rules, you should do fine over the long run. Every trader will have a losing day or week but this is meaningless in the course of a year. Unfortunately, newer traders don’t see it this way and hate it when they lose money. It is this emotion that causes them to make irrational trading decisions and focus on making back the losses.

What tends to happen at this point is the trader loses even more money (Murphy’s Law) as a result. You can bet if they had stuck to their plan, not tried to double up and waited for the appropriate trades to come along, they would have made back the losses very quickly.

We can talk from plenty of experience in this arena and we’ll give you two examples of Kevin’s below.

The first example was about 7 years ago while we were trading options on Dell. Kevin bought a significant amount of options (running into many tens of thousands of pounds) and after an initial increase in price (which would have made him about £10,000 within 30 minutes), greed took over and he decided to hold on. By the end of the day, the price had fallen to the point where he had given up any paper profits he had. Over subsequent days, the price continued to fall so he held on. After several weeks, he was down even more, so he did what all good traders do (!) and bought more! Cutting a long story short, Kevin’s desire to make back his losses cost him £50,000 on that trade.

Now here’s a funny story of Kevin’s that literally only happened around 3 weeks ago. He was on the phone while simultaneously placing a trade on the GBP/USD currency pair. Instead of putting in a trade for £10 per point, he mistakenly put one in for £100 per point (because he was trying to do two things at once – something he should know he can’t do!). The trade went against him and he lost £1400 in the space of 20 minutes. Instead of panicking, he actually laughed, sat back and assessed what he had done. He went back to trading his normal amounts and within 4 days had made back four times what he had lost. Had he panicked, tried to make back that money as soon as possible or doubled up, you can bet the market would have taught him a lesson. He made an initial mistake (one he hasn’t made in about 5 years), but didn’t allow it to control his future trades.

If you feel yourself focussing on the money, but not on the strategies/setups, you should take a step back and assess. The market rarely allows you to get your revenge – but if you stay consistent to your plans, you will do just fine…