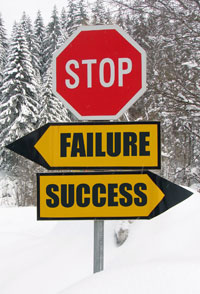 think. New traders tend to think that the pro’s have some sort of secret knowledge/system that enables them to make trading look so easy. However, the difference between a new trader trying to gain consistency and a professional normally comes down to mindset.

Let us give you an example of what we mean. A relatively new trader is given a fairly straight forward strategy that delivers an average success rate of 60%. The new trader is exited that he (for the purposes of this exercise) has finally found something that will ensure his success. Over the course of 10 potential trades using the strategy, it gives a perfect 60% strike rate. However, the mindset of the new trader can hamper his individual performance.

In this example, the strategy starts out with 2 winners, then 3 losers, then 1 winner, followed by 1 loser and then finally 3 winners so overall, it gives a good success rate. The problem is that the new trader doesn’t achieve these results for the following reasons. After the first 2 winners, he is very pleased, then after a string of 3 losing trades he starts to become more hesitant – after all, at this stage he has now only won 2 and lost 3. On the 6th trade, which we know in advance is going to be a winner, the new trader gets nervous and decides to ‘just watch this one to see how it gets on’. When he sees it is a winner, he kicks himself for not taking the trade. He takes the 7th trade which is a loser and so his mind starts playing games with him again. At this stage, he has had just 2 winners and 4 losers. On the 8th trade, he couldn’t bring himself to hit the button and buy the shares even though he knew deep down that he should strictly follow the strategy. Again, this one becomes a winner and again the new trader kicks himself for not trading this time. The 9th trade he takes and wins on but he loses on the 10th trade because he placed his stop in the wrong place (despite where he had been taught to place them).

So although we know the strategy delivered a 60% win rate over the course of 10 potential trades, the individual only managed 30% because he was trying to second guess the strategy (if you just look at his percentage win rate from the actual trades he took then his success rate was still only 38%). Having personally coached a number of new traders, we see this type of error over and over again. It is usually the mindset of the new trader that limits their level of success. Once they understand the psychological aspects of trading and are able to be disciplined, trading becomes that much easier and consistent profitability is now attained.

If you see an opportunity that meets your criteria for buying or selling a share, do not hesitate as this type of trading is not the path to success. Constant monitoring of trades and learning from any past mistakes is what professional traders do and hence why they make it look so easy…