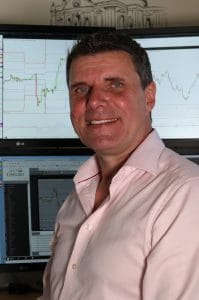 Kym Watson started buying stocks in the eighties when the government started privatising the likes of British Gas. He was then offered options to buy shares in the company that he was working for. This was the beginning of his interest in trading although it was several years later when he caught the bug.

Kym initially worked for a number of large companies rising to senior positions in all. This gave him the understanding of building shareholder value and key fundamentals.

It was on a relief mission to Albania in 1992 that Kym met Charlie and the two became friends as they were left guarding 20 arctic loads of supplies. They shared the love of karate and later following attending a US course which Charlies friend had supplied tickets, they suddenly found another common interest.

Whilst Kym started trading stocks, the US company had highlighted the benefits of trading options alongside these, so this initially became his focus. At that time the cost of trading was high which meant his focus was more on swing trading. After starting trading full time around 2001, Kym then looked at intraday trading. Whilst he initially day traded the US indices he was drawn to currencies where costs were low. After a while he opened a specific forex day trading room where he was able to share the methods used and call some of his trades.

Kym has a analytical nature, thus he has spent years studying different indicators before focusing on those he now uses. He has a library of statistics, some of which he has made available to our day traders, which forms the base for his trading. With this and his analysis of news events, there are not too many things he does not have a stat on!

Kym started karate in 1981 and still trains to this day having reached the grade of 6th Dan in 2016. He has competed and taught internationally and regularly takes part in international courses.

Aside of this he has aspirations of one day getting a decent handicap in golf, although anyone that had watched him play in the EzeeTrader annual golf event would suggest that is unlikely!